A random poppup message on Facebook informed me today that the Ahn'Qiraj doors were finally OPEN! Which means I rushed on my char to see things by myself, I've missed this occasion once, not gonna miss it again. I am so happy this is finally over considering how long it took. From what I understand a slight delay happened due to Fireblooms not being possible to give to the War Effort right near the end. Anyway, we're there!

Unfortunately I had to come all the way from Orgrimmar and the gong had already been hit by the time I arrived in Silithus. A nice crystal welcomed me near the flightmaster and also my friend lag, which was all over the place, but still very much playable. Interestingly two of the people I interviewed in the past were there, A* and Pussochkram, I like to see people that have stayed for so long. 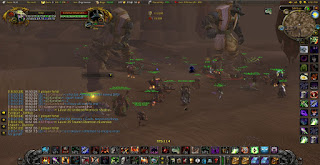 I ran to the gates and noticed Alliance players running all over the place, with a couple Horde, crafty anubisath and silithids playing around, which basically killed everyone in rampage mode, I did not see a single one get tanked correctly by a group and I couldn't access the gong as the Alliance was camping it. Apparently some guys got to hit and kill the colossus from the hives as I could get all those quests from Cenarion Hold. Free loot :D (or bug, perhaps) 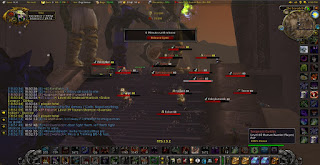 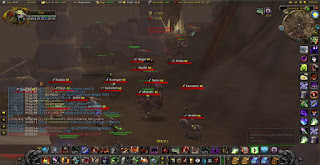 Interestingly there were Qiraj destroyers and anubisath spawning past the Ahn'Qiraj gates that stayed in evade mode (you could go through them and not get aggro) until they had made a full group and rushed to attack Silithus. I wanted to go into the Ruins but it told me that it was currently closed (isn't it supposed to be open now?). I didn't see Roman'khan, Setis & General Pax-lish anywhere. 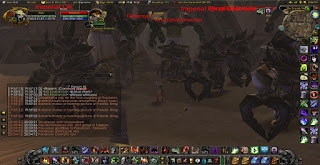 Black Qiraj Battle Tank owners from what I could see : 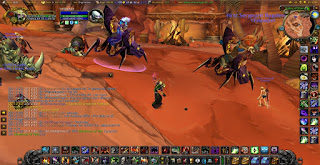 And likely a lot more.

I decided to log on my alt and look for low level crystals, found a single one in the Crossroads, but it wasn't spawning anything. No silithids, no minor annubisaths. I didn't see the crystals that should spawn silithids in Silithus (see this, I had noticed those on my Vanilla WoW video depository) either. Maybe a realm restart is needed, hopefuly it doesn't reduce the duration of this world-event as one of the goals of those silithids is to bring great loot to everyone! That crystal only mind-controled some level 18 guy and got him killed. Now that was unexpected to me ^^. 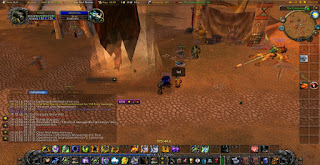 I couldn't see the expected crystals south of Gadgetzan either so maybe spawns are missing, spawning randomly or should only spawn after some time, I don't know. My understanding from videos was that all crystals spawned at once in the world.

Now, I did notice a qiraj spawn crystal (level 30-40) in the Thousand Needles, so I went there. Captains and anubisath had great rare and uncommon loot rate (about one uncommon and rare per kill), as expected but were missing their money. Scarabs (trash) respawned roughly every minute and hit for 100, Captains every 10 minutes or so and hit for 200, Anubisath respawned after 15-20 minutes, hit for 350, all were crowd-controllable. I don't recommend trying to solo them at their level and alone, they do hit for a bit. Mainly melee damage, with a couple abilities (charge, slow, stun, resistances). Farming them at level 60 could be interesting for some little money but prices will likely fall with all those crystal spawns. This got me roughly 25 uncommon level 30+ items and 7 rares in 30 minutes of solo as a level 60 warlock. Rare items are pretty much always the same unfortunately (small pool, roughly 10 rare items per qiraj). 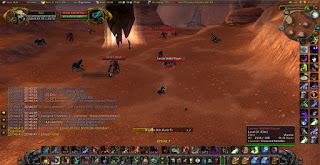 Okay, apparently it is much easier to find those farming spots by using the Twinhead database and looking for their spawns, like this. Do I always have to break the fun with logic? At least not all the spawns are up yet.

*Quick edit 14.08.2016 : C'thun killed by 3 alliance guilds already (Synced, Risen, Vanguard) on the day the raid was opened, congratulations to them all!